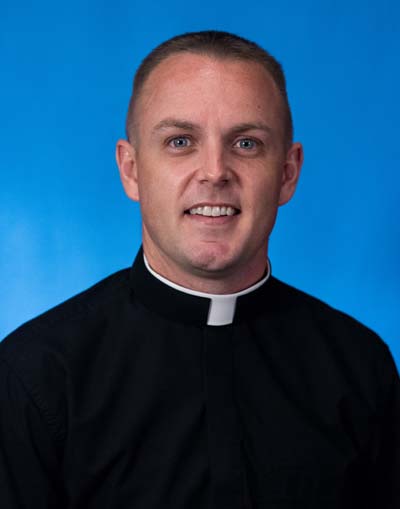 Reverend Patrick May is a parochial vicar at St. James the Less.

Born and raised in Augusta, Georgia, on October 11, 1987. His parents, Pete and Patty May reside in Augusta, along with his older brother, Derek. His younger sister, Dr. Kathleen May, lives here in Savannah.

Fr. May attended Aquinas High School in Augusta. There, he played Men’s Soccer and Captained the Men’s Tennis Team for 3 years. While attending Georgia Southern, Fr. May served as chaplain for his fraternity, Sigma Alpha Epsilon. In 2012, he received a B.A. in Political Science from Augusta University and subsequently attended Mount St. Mary’s Seminary in Emmitsburg, Maryland. In 2019, he received his M.Div. (Master of Divinity) and M.A. (Master of Arts Theology: Sacred Scripture).

Fr. May was ordained a Roman Catholic Priest of the Diocese of Savannah on June 1, 2019.

While at St. James, Fr. May will also serve as Catholic Chaplain for Georgia Southern University – Armstrong Campus.