The History of St. James the Less Catholic Church

Saint James was officially established as a parish on August 15, 1956 and Fr. John Toomey became the first pastor.

St. James and Our Lady of Good Hope

The roots of St. James go back to 1874. The Savannah Morning News reported “the arrival of Benedictine Monks who would erect a school on a tract of land on Skidaway Island for the education of colored members,” (Priest Landing), and on the Isle of Hope a novitate and chapel (Our Lady of Good Hope Chapel) were established on land donated by Doctor Stephen Dupon. Yellow fever took the lives of all but one of the monks nine months later.

The Benedictine Fathers returned in 1877 to Our Lady of Good Hope Chapel, and served the community until 1888. The monks returned again in 1908 to the chapel, and staffed it until the early 1970′s when diocesan priests assumed responsibility. The chapel was renovated on its 100th Anniversary by the parishioners, and is used for special occasions.

Due to the post-war growth of the City of Savannah, Father Terrence Kiernan, OSB, a teacher at Benedictine High School and priest in charge of Our Lady of Good Hope Chapel recognized the need for a church closer to newly developing suburbs. Thus in 1949 the Diocese of Savannah-Atlanta purchased the land with a legacy left by Father Louis Rice of Philadelphia. Father Terrence blessed it on July 25.

A surplus Air Force chapel was moved to the site and the first Mass at the Mission Chapel of Saint James the Less was celebrated on Christmas Day in 1949. The chapel was razed in 1989 to clear the land for building the present church.

Saint James was officially established as a parish on August 15, 1956 and Fr. John Toomey became the first pastor. In the succeeding decades many pastors have served the Saint James parish and have moved on to assume other important duties in the diocese. The chapel at Isle of Hope was designated a mission of Saint James. This historic chapel is now used for Mass on the first Sunday of each month.

Families mean children, and Sunday School classes were taught by the Saint Joseph Sisters from Sacred Heart beginning in 1951. In September, 1956, a school and convent were built, staffed by the Immaculate Heart of Mary Sisters under Mother Marie Antoinette, with an enrollment of 215 students. In June of the same year Father John D. Toomey was appointed the first pastor, and the parish of Saint James was officially established on August 15, 1956, the Feast of Assumption.

In that same month and year, a dream became a reality. Saint James Catholic School opened as four sisters, Servants of the Immaculate Heart of Mary, arrived and began their pioneering efforts in Savannah. Dedication of the school and convent took place in January 1957.

Our pride in the present and our hope for the future reflects an appreciation of the past and those priests, sisters, and lay people who have made Saint James a vibrant and important lifeline in the diocese and community.

The chapel at Isle of Hope was designated a mission of Saint James. This historic chapel is now used for Mass on the first Sunday of each month. 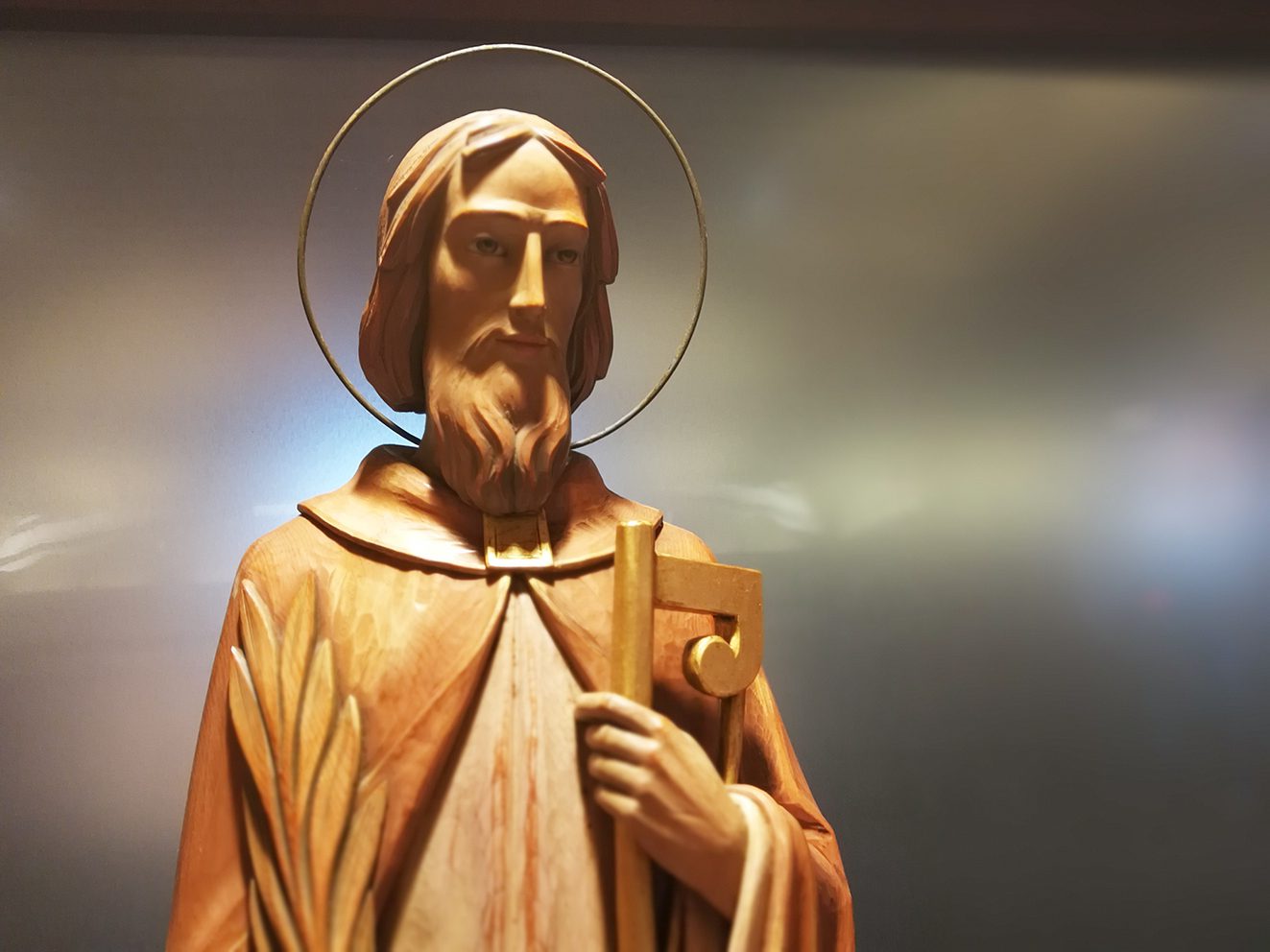 Saint James, sometimes called the Less, was a relative of Jesus, son of Alphaeus, and a cousin of Saint Jude. He is called the Less because he was called by Jesus after the other James, not because he was any less important. He wrote an epistle, which can be found in the New Testament. His mother Mary was at the cross when Jesus was crucified. He became the first Bishop of Jerusalem and presided over the Church there while the other Apostles went forth preaching the Gospel.

Although not given much attention in the Gospel narratives, James received a special appearance from Christ after His resurrection.

James, along with Peter, welcomed the newly converted Paul. When Peter escaped from prison in Jerusalem, he expressly ordered that the news be brought to James. St. Paul refers to James, Peter, and John as “the Pillars” of the Church (Galatians 2:9). When the Council of Jerusalem decided that Gentile Christians need not be circumcised, James formulated the decision. His piety was also admired by the Jews, who called him “the Just.”

He is said to have led a prayerful life of penance. In the year A.D. 62, he was arrested by Jewish officials. He was thrown from a pinnacle of a temple roof then clubbed and stoned when the fall did not kill him, leading to the common iconography of James holding a club.

His feast day (shared with St. Philip) is on May 3rd.